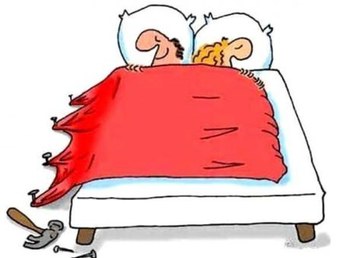 A possible solution.
"A plugger knows that one good turn gets most of the blanket."
— Pluggers here

Unfortunately, people aren't always able to be still when they sleep. They may likely end up trapped in a tangle of sheets and blankets by the time they wake up. This is just what happens when someone is sleeping alone.

If someone else is sleeping in the bed, they will usually have to put up with a sleeping partner who constantly pulls the sheet over him/herself. This may be done unconsciously, or the other sleeper is actively seeking warmth. This would, of course, happen at the expense of the other person in the bed, who will start feeling cold and will probably grab the sheets back. Then, the first sheet-hogger gets cold again, and they tug the sheets back towards themselves, and...you get the picture.

Sometimes accompanies There Is Only One Bed, but is not necessarily its subtrope.