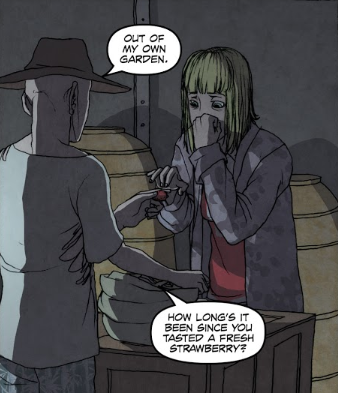 In many stories set in a Crapsack World where civilians subsist on nothing else but Poverty Food, a character is shown buying food in the Black Market, sometimes for an exorbitant price. At least one of the items being bought is something very sensuous, for example, either an orange or a sack of coffee. That character will either stand around and marvel at how wonderful the orange looks against the gray/sepia world, or press the coffee against his nose to absorb the aroma, or take a precious bite of chocolate and perform a milder version of Erotic Eating. Sometimes, a character might be shocked to find one of these foods in a rich person's house.
Advertisement:

In-universe, this could be explained by Only Electric Sheep Are Cheap, or the authors are trying to evoke parallels to Real Life (see examples below). Also, because Dystopia tends to be set in northern climates, it makes sense for people in northern climates to find foods from tropical areas as rare and sensuous because of the implied expense. However, an astute viewer might note that the foods selected by the authors are generally those that can be dramatically used by the actor/director to reinforce the crapsackiness of the Crapsack World and the greed and evil of the elites. It's never something that is dull but nutritious, like peanut butter or spinach. If it's an orange, the color is used to make a stark contrast against the background; coffee/chocolate can be dramatically used by the actors.