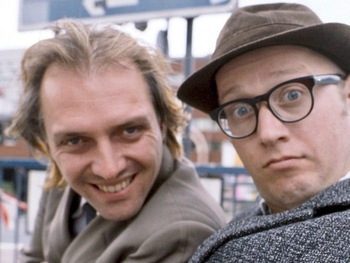 The Hammersmith Hardmen.
Richie: Why can't we ever bloody win anything?
Eddie: Oh, don't be stupid, Richie. People like us aren't meant to win things.
Richie: Well, what are we meant to do, then?
Eddie: Look, you get born, you keep your head down, and then you die — if you're lucky.
Richie: Oh, come on. There must be more to it than that.
Eddie: [Beat] Well, there's the telly.
Advertisement:

The Brit Com, stripped down to its absolute minimum requirements: two idiots, sharing living space, passing the Idiot Ball back and forth so fast that you can't distinguish between the two.

Richard "Richie" Richard [sic] (Rik Mayall) - a sex-starved, sadistic, physically repugnant loser with delusions of sophistication - takes out his frustrations at life upon Edward "Eddie" Elizabeth Hitler (Adrian Edmondson), his boozy, slightly more intelligent, but equally perverted and sadistic flatmate. Frequently, this involves over-the-top violence that would make Itchy and Scratchy wince. Eddie, for his part, is quite willing to respond in kind.

The Spiritual Successor to The Young Ones and Filthy Rich & Catflap, inspired loosely by Waiting for Godot. It ran for three series on BBC2 from 1991 to 1995 before transferring to Theatre as a series of two-man shows, as well as the feature film adaptation Guest House Paradiso.

that after an eighteen-year absence from TV screens, Richie and Eddie would be returning in 2013 for a new six-part series under the Hooligans' Island title used for one of their stage shows. Alas, just two months later, it was announced that the series was not going ahead after all. The only explanation forthcoming was from Adrian Edmondson, who said "We started working on something and we realised why we stopped working together (with the BBC)."

Sadly a year later Rik Mayall died aged 56, thus putting an end to any thoughts of a revival for good and leading to a great What Might Have Been moment in British comedy.

Came forty-fifth in Britain's Best Sitcom. No relation to the donkey-headed character in Shakespeare's A Midsummer Night's Dream.

open/close all folders
A to M
N to Z