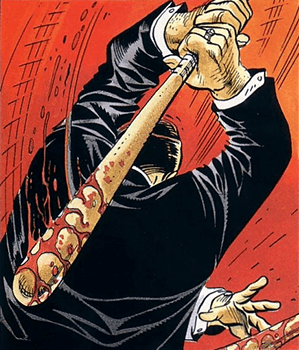 Baseball bats are designed to hit very small, very fast things very hard. They're made out of solid wood or metal, and they're extremely well-balanced. You don't need a permit to buy one, and you can find them anywhere; even a supermarket with a sporting goods section is all but guaranteed to carry baseball bats. Even with no training whatsoever, it's possible for a beginner to pick up a bat and use it to great effectiveness.

All of this makes baseball bats very good weapons, and they're commonly considered as such in Real Life in any country where baseball can be found. Brits, Indians, or Aussies could substitute a Cricket bat — artfully described on the Cricket Rules page as "flat on one side, making it ideal for hitting people who owe you money without leaving a bruise. The flatness also gives it edges, for when you do want to leave a bruise".

Also if a normal baseball bat isn't enough, it's common in fiction to just pound nails, spikes or even glass into it. They're not practical, but they sure do look like they would hurt a lot if they connect. A more rare (and arguably more practical) version is to wrap chains or even barbed wire around it or just cover it with other kinds of junk.

Overlaps with instances of Improbable Weapon User, Weapon Specialization and Improvised Weapon. Subtrope of I Know Madden Kombat. Bonus points when the phrase is used as a Pre Asskicking Oneliner.

Telephone Polearm is a Sub-Trope for very large instances of this.

Not to be confused with the aggressive use of little nocturnal flying mammals, or the use of a pancake mixture as a weapon. Also not to be confused with Home-Run Hitter, although they do occasionally overlap. If this happens to a machine or other piece of equipment, you're looking at a Percussive Shut Down. Swap the bat for a golf club and you're ready for some Golf Clubbing (also compare that). See also Mailbox Baseball.