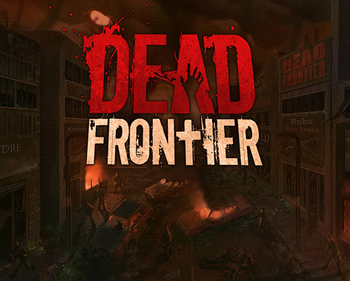 Dead Frontier is an MMORPG set, as its name suggests, during a Zombie Apocalypse. It was developed by Neil Yates ("AdminPwn") and can be found here

. The initial beta launch occurred in 2008 and used Adobe Flash; a 3D version using Unity was then released in August of 2010, and the full version continued to use the engine. In 2019, a 3D Unity-based sequel, Dead Frontier 2, was released through Steam.
Advertisement:

In 2016, the pharmaceutical company Secronom began testing the cancer-fighting "healing virus" Nerotonin-4 on 109 "volunteer" subjects in a French lab. On June 28, the French Gendarmerie raid the facility and release the subjects. Hilarity ensues. When the dust and body parts settle (i.e., when the intro finishes), you begin your (mis)adventures in Nastya's Outpost, one of the last known bastions of humanity in Fairview, before venturing into the mutant-infested Inner City to hunt and peck for anything of use.

There is also a Dead Frontier: Outbreak spin-off, which consists of two

made in Flash, and released in 2009 and 2010. They play out like choose own adventures books that follow an unnamed and unseen male character as the protagonist. Dead Frontier: Outbreak involves our hero trying to get back to his house to save his lovely wife and escape to the countryside with her. The sequel starts off at a farm owned by the protagonist's father-in-law. Cholera has infected the farm's drinking water and infected many of inhabitants there, including the protagonist's wife. The protagonist is sent back into the zombie-filled city to bring some antibiotics to treat this infection.