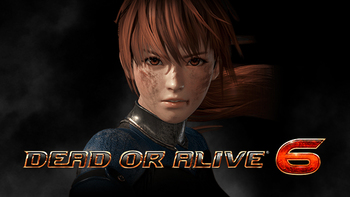 Dead or Alive 6 is the sixth mainline installment of the Dead or Alive series, developed by Team Ninja for PlayStation 4, Xbox One and PC, released on March 1st, 2019.

Running on a brand new engine, Dead or Alive 6 introduces more refined and realistic visual details, including dynamic facial expressions. Notably, DOA6 is also Bloodier and Gorier compared to the previous games, while averting Beauty Is Never Tarnished. Characters make a fierce grimace as they execute combos, sweat is more prominent than in 5, and wounds appear when the characters take damage.

Apart from the visual overhaul, DOA6 features new gameplay mechanics with Fatal Rush and Break Gauge (which introduces the Break Blow and Break Hold mechanics). These are high-powered attacks that require simple commands, but proper timing to be most effective.