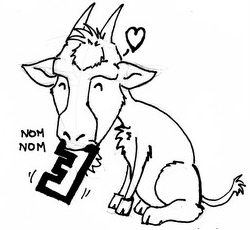 Like Roguelikes, but dislike sinking massive amounts of time? Then boy, do we have the game for you!

is a Roguelike (or perhaps a puzzle game disguised as one) created in GameMaker, and a very unique one, in that each dungeon that spawns takes about ten minutes to play. You choose a race and a class, set out, and try not to die. All your resources (HP, MP, even monsters you can kill) are heavily restricted, and careful rationing of resources is vital to your success.

So despite individual sessions being short, the game has a lot to spend time on. It can be easy to lose yourself.

The Alpha version of the game is freeware. A commercial version with much more content, more detailed art and a semi-relevant plot line was released on Steam on November 7th, 2013, followed by a free Enhanced Edition update on April 16th, 2015.