Film / Shaun of the Dead 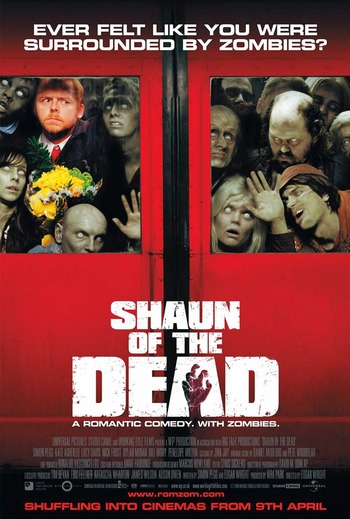 "You've got red on you."
— Various characters, to Shaun
Advertisement:

Shaun of the Dead is a 2004 "romantic comedy with zombies" — a "RomZomCom", if you will — directed by Edgar Wright, starring Simon Pegg and Nick Frost, and written by Wright and Pegg.

A young man named Shaun (Pegg) is dumped by his girlfriend Liz because he lacks motivation and doesn't put enough effort into the relationship. Shaun decides to reform in order to win her back.

His plans, however, are interrupted by the Zombie Apocalypse. In the wake of the mounting chaos, he and his even more deadbeat friend Ed (Frost) embark on a daring journey to rescue Shaun's mother and stepfather, as well as Liz and her annoying flatmates, and take them to the safety of the local pub, The Winchester.

Alternately hilarious, scary, and heartbreaking, the film can be seen as either a parody of zombie movies or a romantic comedy that happens to use a zombie apocalypse as its setting.

The film is the first part of Wright's Three Flavours Cornetto Trilogy, followed by Hot Fuzz and The World's End.

In which Shaun walks to the shop, buys some snacks, and completely fails to notice the Zombie Apocalypse.

In which Shaun walks to the shop, buys some snacks, and completely fails to notice the Zombie Apocalypse.