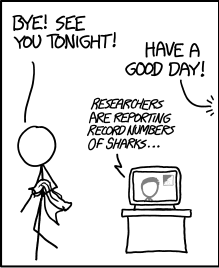 In the world of 24-Hour News Networks it's hard not to stay up to date with all the world's problems and issues. Well, if you're actually paying attention to the news, that is. This trope is when a lot of the impending doom and gloom has been ignored because the characters were going about their lives in a mundane, nonchalant way while ignoring all of the breaking news on the radio and TV. Usually missing out on the early reports of the incoming Alien Invasion, the rise of the machines, the coming Zombie Apocalypse, or just bad crappy severe weather. Which of course would have saved them a lot of trouble later. But hey, this happens to us all in real life, right?

Damn, there's nothing on TV!!.... *looks outside* Hey, what the hell is everybody running from?!!

A subtrope of Failed a Spot Check. See also Worst News Judgment Ever, when the media misses out on the news, rather than the viewers. Contrast Coincidental Broadcast.