Film / The Serpent and the Rainbow 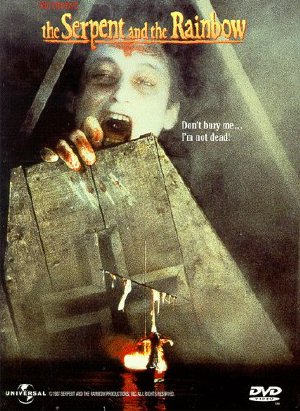 The Serpent and the Rainbow is a 1988 horror film directed by Wes Craven. It is, in a broad sense, a zombie movie, but one of the more traditional, pre-Night of the Living Dead (1968) voodoo types. Originally filmed in Haiti, where a majority of the action takes place, the political and social unrest meant moving the entire production to the nearby country of Dominican Republic midway through production for the safety of the cast and crew.

Anthropologist Dennis Alan (Bill Pullman) travels to Haiti to investigate rumors of a drug used by black magic practitioners: one allegedly capable of transforming the living into zombie slaves. He meets with Marielle Duchamp (Cathy Tyson), a Haitian medical doctor who has been working closely with cases of zombification. One of her most recent cases is a man named Christophe, a fresh zombie with a better memory than usual. In their investigation, they meet with Louis Mozart (Brent Jennings), who, despite being something of a con man, is willing to provide them with the mysterious zombie drug.

Meanwhile, Haitian paramilitary leader Dargent Peytraud (Zakes Mokae) notices Dr. Alan's investigations, and seeks to intimidate him into leaving the country. Alan stands up to the man, only to have his dreams haunted by visions of Peytraud, and the living dead.