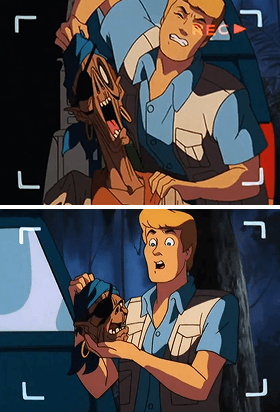 "What? I could have sworn that was a tacky pirate zombie costume!"
Advertisement:

This is Real Life. Everyone knows zombies are make-believe creatures, they're only "real" in the movies.note For now. If you see a "zombie", odds are it's one of your friends with poor taste who insist on scaring you, or someone who has been in an accident of some kind. So when a zombie outbreak starts, it's unsurprising that most people will chafe when confronted with something that — well, only exists "in fiction". Still, you'd think most people have the presence of mind to back away from a smelly, shambling corpse of a man who is missing limbs and moaning for braaaains!...

That is rarely the case here. There will always be one person who misidentifies the living-impaired as a regular, if badly hurt, human. There's two variants of this, with differing levels of idiocy involved.

Rule of Perception is strongly tied to the trope, since the horrific stench you would expect a reanimated corpse to give off almost never comes into play, even in situations where the smell should by all rights be quite overpowering.

This is often easily survivable with Slow Zombies, as you've got a minute or two to realize something's up. Fast Zombies are not so forgiving, and probably only main characters will get away with this.

Generally, any character who thinks a zombie is Not a Zombie is also prone to having Zombie Infectee behavior or becoming one. After all, if he doesn't accept that the creatures outside are zombies, he can't very well become one after being bitten, now can he?

Contrast Mistaken for Undead, Most Definitely Not a Villain and Paper-Thin Disguise. Not to be confused with Not Using the "Z" Word, where everyone acknowledges that the zombies are undead, they just don't want to use the usual term for them; and Totally Not a Werewolf, where a non-human of one type (let's say a Jiang Shi) gets mistaken for another similar one (a zombie) rather than for a living human.