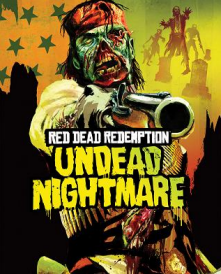 "The dead are risen!"
"After months away, John Marston has returned to his loved ones. While trying to rebuild his ranch, and win back the trust of his family, Marston awaits whatever life will throw at him. As he drives home one evening from an errand, he ponders whether a man can ever escape his past. He is a man who is ready for anything... Almost anything. Hmhmhmhahaha!"
— The Narrator
Advertisement:

The story takes place in an Alternate Continuity, and begins during the "Homestead" portion of the original game. The Marstons are enjoying an evening by the fire together but are worried about Uncle, who hasn't returned home yet. The weather has taken a turn for worse so John decides he can't go looking for him until morning and heads to bed.

Later that night, John Marston and his wife Abigail are rudely awakened by Uncle who has been zombified. In the struggle Uncle bites Abigail, infecting her, and John shoots Uncle dead. Jack runs to the aid of his mother upon hearing the gunshots and is bitten by her. John hogties his family and leaves them raw meat while he leaves to find out what the hell is going on and to hopefully find a cure.