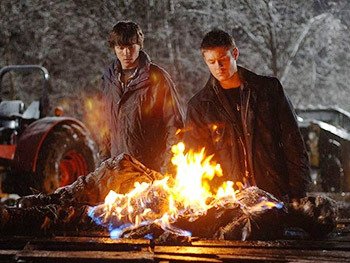 "In light of current understanding of ork biology, [wanting to burn the bodies] seems remarkably prescient of Jurgen, although it's perfectly reasonable to assume that, over generations of war with the greenskins, the Valhallans had noticed that re-infestation rates were significantly lower where ork cadavers were disposed of in this manner and had adopted the practice without fully understanding why this should be the case."
— Amberley Vail (in a footnote), Ciaphas Cain: Death or Glory
Advertisement:

In some worlds, or for some creatures, death is not permanent. For instance, vampires can respawn or sorcerers can resurrect the dead. So what if you've killed someone or something and you want to make sure it stays dead?

This is the reason why bodies of believed witches, vampires, and the like are burned after being killed (if they weren't killed by burning in the first place): the fire purifies the taint of evil, preventing resurrection or respawning. This variety will often show up in stories, where bodies will be burnt to prevent them from (potentially) being resurrected or from coming back to life.

This practice is generally connected to the ideas behind Fire Purifies and Kill It with Fire: if fire burns away wickedness and evil things can come back, it follows that cremation prevents unwanted resurrections. There's also simple logic behind it: no body to animate - no problem, no matter whether it actually purifies evil or not.

Corpses in fiction tend to be Made of Incendium, which generally makes things easier when they must be completely burned to get rid of.

Compare to Make Sure He's Dead, since this is a viable method to see that some enemies stay down for good, and Viking Funeral, where the body is burned for religious or ceremonial reasons. See also Kill It with Fire and Disposing of a Body. Frequently overlaps with Burn the Undead, which is where fire is good at killing undead the first time around. In a video game, this might be a way of putting a permanent end to a Reviving Enemy.