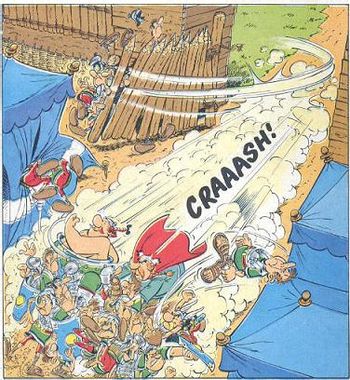 When somebody spots their nemesis or target or temporary #1 foe across a battlefield and they go after them, anyone who comes at them or gets in their way as they charge will be thrown aside without a glance. If it's a good guy going after a bad guy, the emphasis will be on how determined they are; if it's a bad guy going after a good guy, the message will be more that the bad guy's really big and strong and intimidating. If the bad guy is really evil he'll even mow down his own people just to get at his target.

Bad guys don't always need a battlefield for a Foe-Tossing Charge; they'll just as happily use this tactic in a nightclub or shopping mall, basically any time there are people between them and their target. Another variant is when an ally of the hero stands up to the bad guy and says "If you want to kill him you'll have to go through m-" and gets casually flung out of the way.

Alternatively, the good guy may kick off a Foe-Tossing Charge if he sees someone dear to him surrounded by enemies, in an attempt to get to them. For some reason, it ends badly more often than vice versa, so expect a Slow-Motion Fall somewhere along the way.

May elicit Oh, Crap! or Bring It On from the target, depending on their degree of badassery. Very frequently a characteristic of The Juggernaut. If the people in the way aren't even trying to resist, you're probably looking at The Dreaded.

Could be used in conjunction with a Dynamic Entry. Compare Mobstacle Course.

The Gauls take on the Romans the only way they know how: together, along with sips of magic potion.

The Gauls take on the Romans the only way they know how: together, along with sips of magic potion.