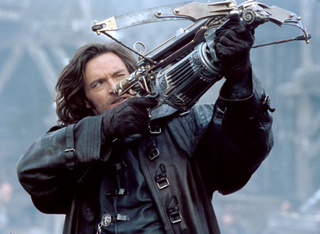 Some vampire hunters put a lot on the stake. Others use more stakes.
"Now, this isn't really a problem, but something else I noticed is that in the world of Dungeon Siege, bows fire more slowly and do more damage than crossbows, which fire faster, but do less damage. I honestly have to wonder if the programmers misread the design documents or something, since this is the exact opposite of reality."
— Ross's Game Dungeon on Dungeon Siege
Advertisement:

Automatic Crossbows are crossbows that allow the user to shoot several times before having to reload, just like modern guns do.note Technically, most examples are semi-automatic crossbows (one bolt per pull of the trigger), while a fully-automatic one would fire several bolts per trigger-squeeze. Many works of fiction are set in a time period when firearms are not available, and crossbows are the nearest equivalent. This is especially true in the fantasy genre, where Fantasy Gun Control is the default. However, crossbows take time to reload, which can be frustrating for people used to the rapid action of modern gunfights. And to those who are used to modern sporting crossbows, which are much faster to reload but also much shorter-ranged and less powerful than the typical medieval version. Sometimes in a work, the urge to use some Guns and Gunplay Tropes is just too powerful. So the obvious solution to this dilemma is to give crossbows the ability to shoot an entire magazine of ammunition without having to reload. Not only do they add instant awesome, but they allow having More Dakka.

In real life, it is much more difficult to create such a weapon than many works assume. Automatic firearms work by using excess energy from the detonation of the propellant to reload and recock the weapon. In a bow powered by elasticity, there is no such simple source of excess energy. This is no fun, as you still want said automatic weapon. There are several ways this might be accomplished. The most realistic options use various types of hand-powered mechanical device to produce repeating bows that are similar to Real Life historical examples

but dialed up to the max. Others might use Schizo Tech or magic to accomplish this purposes. If it is the latter, the use of magically justified Bottomless Magazines might make the Automatic Crossbow even more powerful.

Subtrope of Bows and Errors. Compare with Multishot when one gets similar results with a regular bow.