Shoot Out the Lock 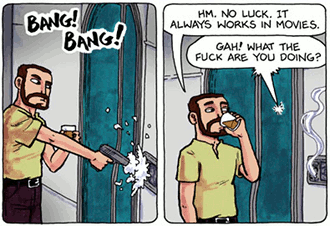 "Sergeant Colon!" he snapped, his mind still buzzing with universal policemanhood, "shoot the lock off!"
The sergeant hesitated. "What, sir? With a bow and arrow, sir?"
"I mean-" Vimes hesitated. "I mean, open these gates!"
— Terry Pratchett, Guards! Guards!
Advertisement:

In movies and television, a locked door, or a padlock on a cage is never an impediment so long as the Hero has bullets to spare. One or two shots is generally enough to destroy the lock, allowing the door to open.

Unfortunately, in real life — as shown by the MythBusters — this requires a high-powered gun at close range, which causes lots of very dangerous shrapnel. Lesser firearms, especially handguns, may harmlessly bury rounds in even standard padlocks to little effect. Only SWAT teams and soldiers ever do this in real life, and it involves a shotgun, Kevlar body armor, specialized ammunition (a powdered metal breaching round, often jokingly referred to as "Avon Calling"), and full-face protection. Even then, they don't aim their weapons at the lock; they aim at the surrounding door or the hinges. The old standby "entry tool" (a small battering ram) is a better choice in most situations. The reason breaching shotguns exist at all is that a battering ram requires at least two people to operate, and the shotgun can be used to shoot bad guys too. That, or a good hard kick on an especially flimsy door.note The MythBusters have done that one, too. The only reason it failed was that one lock was installed with a stronger screw than was included with the installation kit, and even that one would have failed eventually if they'd kept going.

Attempts to shoot the lock mechanism itself tend to leave the distorted metal jammed in place while the bolt or latch remains closed. In effect, the door is now more locked than if you had left it alone. (Which some people do take advantage of.) Although if you decided to shoot the lock with a Rocket Launcher, that's another story.

The Speculative Fiction version is shooting the control panel for the automatic door or force field, or automatic force field door. While there are doors that "fail safe" or "fail open" when power is cut, in fiction this is always coincidentally whichever the shooter and/or plot requires. (Note to villains: The Evil Overlord List recommends rigging yours to reverse this.)

Tested on The Box O'Truth.

Not to be confused with getting shot out of an airlock.

See also "Open!" Says Me, There Was a Door and Axe Before Entering for other violent ways to get through the doors, and Weld the Lock, for using lasers and similar things to seal doors shut.