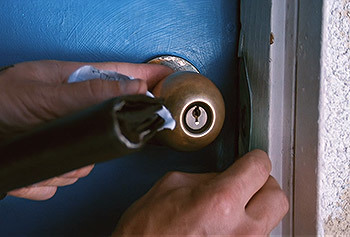 "Any lock can be picked by a credit card or a paper clip in seconds."
— "What Movies Teach Us"

In TV land, some 90% of locked doors can be opened in seconds by following three simple steps:

Up to a point, this used to be Truth in Television. Early spring-bolt locks could be circumvented with flexible strips in a similar way (though actual credit-cards are usually too stiff for the purpose), especially if carelessly installed. However lock manufacturers introduced features to prevent this kind of attack a long time ago, and dead-bolt locks were always immune to it. As such, it's a Discredited Trope.