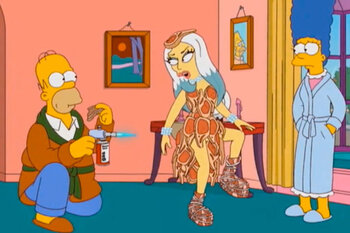 The Simpsons has done this many,

An episode of a show which departs from its usual type of plot to make the best possible use of a celebrity or major star who happens to be available, regardless of plausibility, coherence, or continuity.

If the Celebrity Star is a musician or band, they often play themselves (or a thinly veiled facsimile thereof, as on The Facts of Life) and usually have to play one of their hit songs.

See History with Celebrity for cases where a main or recurring character happens to be old friends with the celebrity. See Special Guest for episodes that aren't focused on the celebrity. See As Himself for works when the entire series/film is about the celebrity playing themselves.