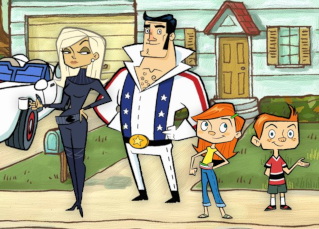 As the Expository Theme Tune goes, one day while cleaning the sleeping area in their rundown orphanage, orphaned siblings named Todd and Riley stumble across a Fleemco comic book and an ad that promises a low-cost "replacement service." Mailing the ad back for $1.98, the kids get new parents: a female British secret agent named K (along with her sarcastic talking car) and a none-too-bright professional daredevil named Dick Daring. In addition to this, they also receive a pair of Fleemco phones that allows them to dial the company's CEO, Conrad Fleem, and request for any person/animal they want to be replaced with something more to their liking.

The series continues on to follow Todd and Riley's chaotic misadventures as they continuously use Fleemco in an attempt to better their lives in nearly every problematic situation they encounter. As the series progressed, the hired replacement would cease being a direct source of a given conflict, with plots being driven more by quirky behaviors of the main and recurring cast. The show's second season also forwent the Two Shorts format of the first, consisting mainly of 22-minute stories. The Grand Finale, "Irreplaceable", aired on March 20, 2009.

No relations to the football movie starring Keanu Reeves nor the Minnesotan punk band.

Todd and Riley were both so sad. Then they came 'cross a website called TV Tropes:

Riley: A sloth? That's about as laid-back as you can get!