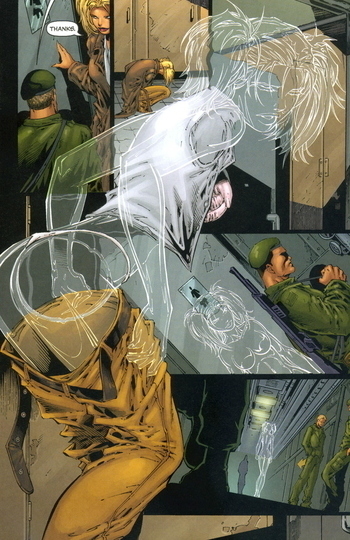 Here she comes, boogity, boogity, there she goes...
"An invisible must always be able to disrobe in an instant, or his power is useless!"
— Millard, Hollow City
Advertisement:

Not all invisibility methods are created equal. While many works Hand Wave away the problems with invisibility — being able to see being the main one — one specific form of Invisibility with Drawbacks frequently comes up. Namely: you may be able to become invisible, but that doesn't mean things you interact with can become invisible. That includes your clothes.

This can be explained in multiple ways. Invisibility as a drug or innate ability may only affect the natural body, leaving clothing and other external objects out of luck. A person's original clothing may have turned invisible as well, but that's no guarantee that they will remain intact. A Literal Genie may make the person invisible, and just the person.

Ultimately, if this trope is in play, expect the Mundane Solution to come up — by definition, nobody can see the invisible person, so going around naked is an acceptable solution to being unable to make other things invisible. This will probably be Played for Laughs the first time it's brought up, since the insinuation of nudity as well as the reactions to such is classic comedy. There's also an inherent sexiness to the concept — oftentimes, this trope is averted specifically because the producers want to avoid risque situations.

Actually using the power afterwards, on the other hand, can often be anything but funny and sexy. After all, being naked doesn't just mean being indecent, it also means being completely unarmed and vulnerable. And if going outdoors, then add Exposed to the Elements on top of that. Even beyond the nudity itself, the same rule that prohibits wearing clothes also prohibits carrying things. In general, an invisible streaker is probably going to be susceptible to as many of invisibility's Logical Weaknesses as the author is willing to acknowledge, so the streaker will have to be extra careful to avoid doing even a minor thing that might get them spotted, and especially anything that might render them a visible streaker, since a Defeat by Modesty is sure to follow. (Or, if it doesn't, then they get to continue sneaking around with modesty on the mind, which is hardly better.)

On the other hand, for characters who are always invisible, this apparent downside is flipped on its head and usually ends up being pretty convenient for them, since they can avoid all the awkward situations that always-invisible characters with always-invisible Magic Pants tend to get into—for an always-invisible streaker, being visible is as as simple as getting dressed (though they might have to wear a burqa or similar clothing).

As a final note, if you think about it too much, you might stumble upon a problem with this trope: at any given time, a person will have bacterial colonies whose members come and go, viral invaders being fought by their immune system, food being digested or excreted, dirt and dust falling on their skin, cells falling off their body, etc. — What exactly counts as being part of an invisible person's body? There's just no hard line. Whatever the source of the character's invisibility, the Required Secondary Powers that this trope supposedly averts may not be so "secondary" after all. The few Real Life attempts at invisibility use the inversion of this trope, which is the Invisibility Cloak.

Compare Shapeshifting Excludes Clothing and Can't Take Anything with You.