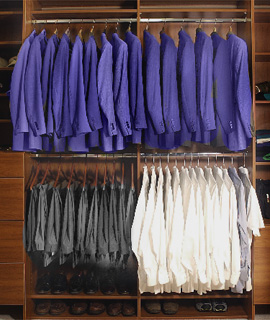 The gray shirt is for special occasions.
"I feel like I've been wearing this same red dress forever!"
— Lisa Simpson, The Simpsons
Advertisement:

The character always wears the same outfit, regardless of the setting or season (this includes backpacks and other accessories). Winter (or at least a Christmas Episode) may sometimes see the addition of a heavy coat, but circumstances will conspire to put the character in a situation where they must shed the coat, at which point it is never seen again. A more likely choice is a hat, scarf, and perhaps mittens, which imply colder weather without obscuring the character's trademark wardrobe. Sometimes, they'll even be shown to have a coat with the exact same color and patterns as whatever is being covered by it.

Even characters whose very nature should prevent them from having such a Limited Wardrobe (read: The Fashionista) may still have one. A common Lampshade Hanging is revealing the character's wardrobe to consist entirely of multiple copies of the same outfit, doubly so if another character points to an arbitrary item and explains, "That's their favorite".

One benefit to this trope is that characters are recognized by their clothing. Their clothing becomes just as much identified with them as their hairstyle and personality. Always wearing a plain T-shirt, shorts and sneakers can indicate a relaxed personality; an expensive business suit is the hallmark of any Corrupt Corporate Executive. A more logistical reason is that whether something is filmed or animated it is rarely done in a sequential order. Even though character models are rather simple to produce and alter and in live action rather easy to change clothing, making such changes on a regular basis requires a great deal more effort to maintain continuity from scene to scene. This is kind of the same reason main characters have a Dirt Forcefield and have little Clothing Damage unless dramatically necessary.

This trope is especially prevalent in shows with heavy merchandising tie-ins, where it is considered important to maximize the resemblance between the characters and their action figure counterparts. A rotating and varied wardrobe would counter that. In animated works, this can be the mark of cheap animation, and is deliberately done so as to allow the studio to recycle as much Stock Footage as it possibly can (See Filmation). It happens with broadcast TV anime, due to having smaller budgets than movie/OVA works. This also cuts time, since many series are produced on a deadline, too.

This trope is extremely common in video games, RPG's especially, to the point of having its own sub-trope, Informed Equipment. Often, characters will wear only one primary outfit throughout the entire course of the game.

A variation in Live Action is to have variations on the same outfit scheme, such as Hawaiian shirts, polo shirts, the color mauve, etc. See Consistent Clothing Style.

Contrast Unlimited Wardrobe. Compare 24-Hour Armor and Clothes Make the Legend, where the marketability and recognition factor of an iconic outfit outweighs any desire to vary it on the part of a show's production staff. Also compare Only Six Faces, which involves character designs instead of clothing; and Menswear Ghetto.

Every time he tries to take it off, a new one, in a different color, appears underneath as part of a curse his sister put him under.

Every time he tries to take it off, a new one, in a different color, appears underneath as part of a curse his sister put him under.