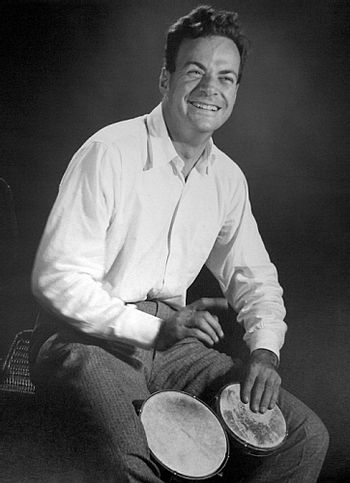 "On the infrequent occasions when I have been called upon in a formal place to play the bongo drums, the introducer never seems to find it necessary to mention that I also do theoretical physics."
"If that's the world's smartest man, God help us."
—Lucille Feynman, on Omni magazine naming her son the world's smartest man.
Advertisement:

Drummer, lockpicker, artist, teacher, and raconteur... who also won a Nobel Prize for his work on quantum electrodynamics. Richard Feynman (May 11, 1918 – February 15, 1988) was considered one of the greatest scientific minds since Einstein. Even more than his contributions to science (which are numerous and varied), though, he is best remembered today as a personality, an irreverent, skeptical, iconoclastic embodiment of what a real scientist ought to be.

Born in Far Rockaway, New York in 1918, Feynman showed a passion for science at an early age. Much of his bedroom was taken up with electrical apparatus, and he often made pocket money by fixing radios. He attended MIT, and had nearly finished his postgraduate work at Princeton when he was recruited to work on the Manhattan Project.

Personality-wise, he was known to combine eccentricity with a playful attitude to life and a love for practical jokes. As the youngest group leader at Los Alamos, he was often sought out by the older, more eminent scientists as a sounding board, because he was one of the few young physicists who wasn't too awestruck to disagree with them. During this time, he also became skilled at picking locks and breaking into safes, usually by guessing (he would note that some of them were frighteningly easy to figure out considering what they were supposed to protect) or stealing the combination. He would later brag that he had opened safes containing the greatest treasure of all time: the secrets of the atomic bomb.

During his work on Manhattan Project, he married his high school sweetheart Arline Greenbaum who was at that time already terminally ill with tuberculosis and tragically died shortly after. She was a perfect match for him in many aspects, sharing his sense of humor and a penchant for pranks. The story of their love is described in his second autobiographic book What Do You Care What Other People Think? (the title is actually Arlene's own words).

Given both his importance in history and his larger than life personality — and the fact that a lot of the current generation of science fiction writers read Surely You're Joking, Mr. Feynman at an impressionable age — he's becoming increasingly popular as a Historical Domain Character.

While many regarded Stephen Hawking as the greatest theoretical physicist since Albert Einstein, Hawking himself felt Feynman deserved that title more.