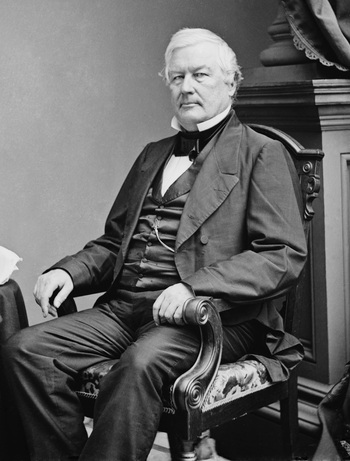 The most interesting thing about this president is that his name is Millard Fillmore.
"Our most Millard-Fillmore-esque president!"
—How To Fight Presidents
Advertisement:

Millard Fillmore (January 7, 1800 – March 8, 1874) was the 13th President of the United States (1850-1853), after Zachary Taylor and before Franklin Pierce. Not many Americans know much about him besides that he was a president, other that he had a ridiculous name. Lots of jokes have been made about this.

Prior to becoming President, Fillmore was nearly as obscure to contemporaries as he is today. A native of Buffalo, New York, he was elected to Congress as an anti-Mason in 1832 and joined the Whigs after that party collapsed. His time in Congress was largely uneventful, and he left office in 1842 with few accomplishments aside from promoting economic tariffs. In 1844 Fillmore ran for Governor of New York and lost, but managed to remain popular with New York Whigs and won election as State Comptroller in 1847. Fillmore probably achieved the height of his political career during his brief time in the post, pushing for expansion of New York roads and canals while implementing financial reforms that stabilized state banks. Fillmore used his friendship with Whig Party boss Thurlow Weed to win a spot as Zachary Taylor's running mate in 1848.

Two years later, Fillmore ascended from the vice presidency to the presidency upon the death of President Taylor, making him the fourth president from the Whig Party (third if you exclude John Tyler, who was expelled from the party while in office). A few months into his term, he helped create the "Compromise of 1850," an agreement that was widely considered to have staved off Civil War at the time. In the agreement, California was added as a free state, the slave trade was banned in the District of Columbia (which, not being a state, could still legally trade slaves), and the federal government became required to find and return escaped slaves to their owners (that part was very controversial). Ultimately, though, it may have done more harm than good, as many felt that it legitimized the slave states and allowed them time to build up their militaries. It should be noted that the northern states also gained more army-building time from the compromise, along with a more robust industrial base that made them better-equipped to fight a sustained war, but then again that could just mean it guaranteed the Civil War would be bigger and bloodier for both sides. That being said, Fillmore (along with many other contemporary politicians) had hoped that the compromise would buy enough time for the slavery issue to burn itself out naturally, and though in retrospect this may have been extremely naive, he couldn't feasibly have predicted that this plan would be undermined by the Kansas-Nebraska Act during Pierce's presidency, before being fatally short-circuited by the Dred Scott decision (the end result of which was that slavery advocates switched from merely defending it to actively trying to force its legalization nationwide) at the start of James Buchanan's presidency.

After that, the only really notable thing about Fillmore was that he was the one who sent Matthew Perry (not that one) (yes, that one) to open Japan to trade with threats of violence, though Perry didn't actually arrive there until after Fillmore was out of office. So you have Millard to thank for the entirety of Rurouni Kenshin and that one episode of Samurai Champloo and Hetalia: Axis Powers if nothing else. Other than that, he basically kept the seat warm in the White House while the country shuddered closer to civil war. While getting the Compromise of 1850 passed at all in the face of such a hostile political environment was arguably the biggest single achievement of any Whig President (the lion's share of the credit is usually given to Senators Henry Clay and Stephen A. Douglas for pushing the compromise through, albeit Fillmore vetoed an earlier version that gave even more concessions to the slave states), Fillmore is generally regarded as a worse President than Taylor, since today Fillmore's compromise is largely seen as an act of appeasement to the South while Taylor wanted to prevent slavery from expanding. He ultimately proved to be the last President from his party, and is (arguably) considered to be the worst of them. In all, he suffers much the same problem as Neville Chamberlain, as historians are divided over whether he failed to nip a solvable problem in the bud, or took the only viable course of action when dealing with an impossible situation.

After leaving office, Fillmore tried again for the Presidency in his own right in 1856 as part of the "Know Nothing" party (not their actual name, but still). While he did put in one of the best ever performances for a third-party presidential candidate (second only to Theodore Roosevelt in 1912, in fact), he split the vote and helped ensure the election of James Buchanan, under whose watch the country fractured and Civil War became inevitable. Also, his wife died mere weeks after he left office in 1853. Fillmore remarried five years later.

Fillmore died in 1874, and his alleged final words, "The nourishment is palatable," have become infamous for their banality.

Travel writer Bill Bryson did at one stage bemoan the fact that Fillmore had "become so celebrated for his obscurity that he is no longer actually obscure".

Fillmore Street in San Francisco was named after him, which in turn gave name to the Fillmore Auditorium (one of the incubators of the Psychedelic Rock movement of The '60s) and the early 2000s ABC animated series Fillmore!; both of these things would undoubtedly have confused the former President to no end.

Fillmore was not the first president with a running water bathtub, contrary to popular legend. H. L. Mencken made that up for a lark and people believed him.

Examples of Fillmore in Fiction: