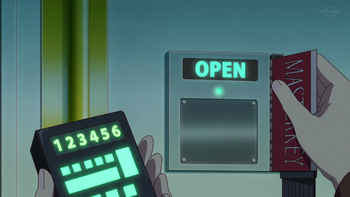 The sort of thing an idiot would have on their luggage.
"The guy who made the software was called Jeff Jeffty Jeff, born on the 1st of Jeff, 19-Jeffty-Jeff. So I put in 'Jeff', and hey!"
— Eddie Izzard, Glorious
Advertisement:

It seems that most characters in fiction missed the memo on making a good Secret Word or pass phrase. They are almost invariably single words, names, or dates of significance to a character which can be easily deduced using a little detective work: the clue is often right there on the desk, in the form of a picture or memento. Or simply spelled out in bold lettering on your commemorative plaque or a wall poster. Sometimes, if the pass phrase is voice-activated, and particularly easy to crack, the main characters will guess it accidentally through normal conversation. Another thing that's widely overlooked in fiction is the fact that a password in most cases has to be matched with a username. Many websites and servers nowadays also require you to include mixed-case letters, number, and special characters in an effort to make your password less guessable.note Which is actually outdated - general consensus now is to make your password as long as humanly possible. In addition, they lock you out after three tries. Both these measures can be ignored at will in fiction if it serves the plot.

There is a dramatic purpose to this. A character's password can give a glimpse into their mind, by showing what person, thing or concept is occupying their thoughts. Also, it allows for dramatic scenes where the heroes try to guess the villain's password based on what they know about him.

A related trope in fiction is to have the password entry plain and clear—on the screen—for all to see. No sense in bleeping out the characters with asterisks or a mute prompt. Of course, scriptwriting-wise, a particularly amusing password can elicit a humorous response from the audience this way without dialogue exposition.

This is sadly Truth in Television, as the Real Life folder below demonstrates, with often devastating results.