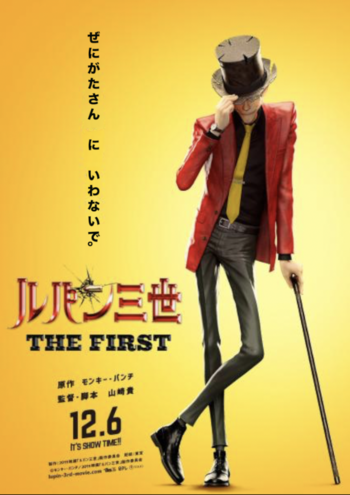 Lupin III: The First (2019) is the first CG animated Lupin III theatrical release (though not the first CG production, that would be the short bundled with the Lupin: Master File 40th Anniversary box set). The film was directed by Takashi Yamazaki.

It follows master thief Lupin III as he goes after "The Bresson Diary", the only thing that his grandfather ever failed to steal, which supposedly leads to a hidden treasure.

As he tries to steal the diary, he runs into Laetitia, a young woman who's also after the diary at the behest of her grandfather. Together, they work to unlock the secret of Bresson's Diary and the mysterious treasure.

Along the way, they get caught up with Nazis and Interpol and discover a secret that could change the world.

Released in Japan in December 2019, Lupin III: The First, was the first Lupin III theatrical production to be announced after creator Kazuhiko Katō's passing. GKIDS picked up the film for release in North America in autumn 2020.