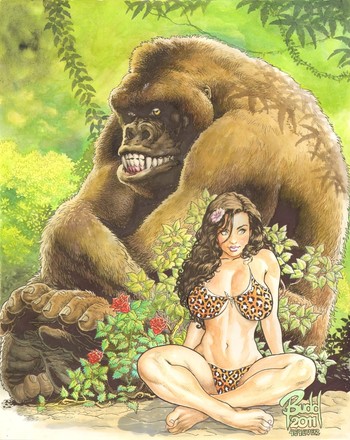 Cavewoman is an American comic book created by Budd Root. It has been published primarily by Basement Comics and additionally by Caliber Comics and Avatar Press. The story follows superhuman Meriem Cooper, a voluptuous Nubile Savage in a snakeskin bikini, as she battles dinosaurs.

Meriem Cecilbie Cooper is born in July 1980 to parents Robert Addam Cooper and Gail Nicole Reicher, in the town of Marshville, Oregon. After Robert dies of unknown causes, Gail turns to drugs, which leads her to fall in with an unsavory group of men. Eventually wanting to sever her ties with this group for Meriem's sake, Gail seeks the help of Meriem's scientist-inventor grandfather, Francis Peacock Reicher, affectionately called "Gramp." After first being thwarted, Gramp makes a mysteriously superhuman return, defeating the men easily and taking Meriem away on a hovercycle from the future.

At Gramp's laboratory, Meriem discovers a time machine and a body-enhancing device that allows a living being to pass through the time stream. It is here that she first meets Klyde, Gramp's 15-foot-tall lab gorilla who has been accidentally altered by the body enhancer. Gramp then enhances Meriem as well, and the trio begins an ongoing adventure through time while on the run from dinosaurs and a secret branch of the government.

As events transpire, Gramp is written out of the story when he is killed by a Tyrannosaurus Rex and Meriem stayed far from the cave in which they settled down. After a fierce fight with local carnivores near the "Quasi-Birds" nests, Meriem ended up naked when her clothes were torn off during the fight. Upon aging into a buxom 19-year-old, Meriem had lived in the local jungles naked (except for her hunting weapons), savage, happy and free. Dinosaurs were taught to fear her. Meriem reunited with Klyde, who attacked her and broke her weapons. She then returned to the cave where she and Gramps had settled down. Not wanting to be naked and savage anymore, she eventually made a jungle bikini (with dinosaur teeth hanging on the strings) out of a leopard-printed snakeskin blanket. She also avenged her grandfather by slaying the tyrannosaurus responsible for killing him, but rescued two tyrannosaurus hatchlings from velociraptors. One hatchling, named Harmony, became Meriem's companion and the other, named Peace, became her enemy.

Later, the whole town of Marshville is transported into a primitive past.