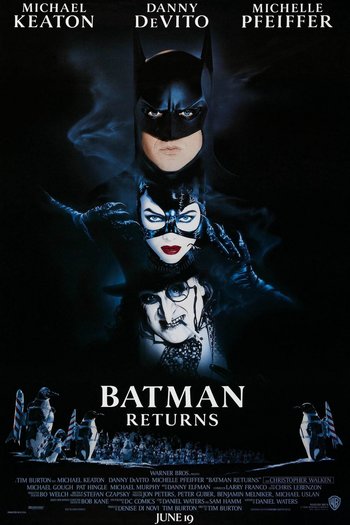 The first sequel to Batman, seeing release in 1992. Like its predecessor, it was directed by Tim Burton and starred Michael Keaton as the eponymous crimefighter.

This film was aggressively merchandised, with the characters appearing on everything from posters to beach towels. It also inspired a beautifully illustrated one-shot comic adapted by DC Comics editor Dennis O'Neil (with a cover painting by longtime Star Wars artist Dave Dorman) and two novel adaptations — one a more innocent and adventurous treatment by Andrew Helfer and the other a much more cynical version by Craig Shaw Gardner. For the sake of thoroughness, tropes based on the comic and the two novels will be allowed on this page as well.

Keaton hung up the cowl after this movie, declining to return for Batman Forever after seeing the script's noticeable change in tone from the previous entries. However, Keaton is now set to return to the role of Bruce Wayne after three decades in The Flash, alongside Ben Affleck's version of the character from the DC Extended Universe, currently set for release in 2023.

The recently announced comic book continuation series, Batman '89, written by Batman writer Sam Hamm and illustrated by Joe Quinones, is set after the events of Batman Returns. It was released digitally on July 27, 2021.