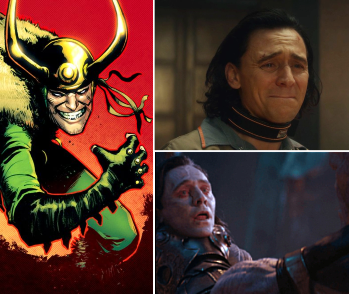 From comic book mischief maker to mournful son in one timeline and a victim of Thanos in another.
Advertisement:

Adaptational Sympathy is when a character who either had no motive in the original work or a more twisted motive is explicitly rewritten so audiences might sympathize with them better. If an author is underwhelmed by the motive of a villain in a story with Black-and-White Morality, they might take the opportunity to change it when adapting the work.

Maybe the villain has a brand-new Freudian Excuse in the adaptation. Maybe they're suddenly a Well-Intentioned Extremist who thinks the end justifies any means or a Tragic Villain acting because they have to, not because they want to. They might be Brainwashed and Crazy. Or maybe the world just kept treating them like crap, so they decided they might as well be the bad guy like everyone expects them to. If the hero was a Flat Character, they might get a new backstory to add dynamism. Or, Values Dissonance might come into play if the character's actions in the past would not fly today, so it was changed in order to avoid making it come across as stereotypical.

In Fan Works, this can often overlap with the Draco in Leather Pants treatment, where fans will make a character more sympathetic than they ever were onscreen. Sometimes this will become Ascended Fanon when a Promoted Fanboy gets the chance to work on the franchise.

Franchises having their own pages: