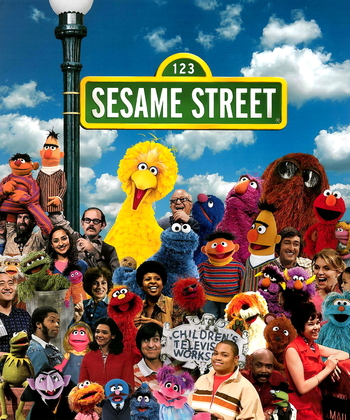 ♫ Can you tell me how to get, how to get to Sesame Street? ♫
"You've never seen a street like Sesame Street. Everything happens here. You're gonna love it!"
— Gordon (Matt Robinson), introducing a girl named Sally (and the audience) to the street in the first scene of the first episode in 1969.
Advertisement:

Sesame Street is a long-running PBSnote It debuted on the National Educational Television (NET) network, but NET transitioned into PBS right before the beginning of its second season, and it now also airs on HBO Max. children's television show that debuted in 1969. The Children's Television Workshop (CTW, now Sesame Workshop), a project spearheaded by producer Joan Ganz Cooney, created the show as a means to prepare young inner-city children for kindergarten. Instead, it got to everybody and became one of the all-time great educational shows.

and the What Happens Next machine (see below) demonstrate tools of logic and reasoning such as trial and error, the process of elimination, and cause and effect. and social skills to its young audience through a kaleidoscopic blend of live acting, puppetry, animation, and short films. In a radical departure for the time, it was designed to deliberately mimic the fast pace and style of TV advertising in order to "sell" learning to kids: An Aesop-friendly story featuring the recurring characters on the Street would be intercut with rapid-fire "commercials" for that day's "sponsors" ("Sesame Street has been brought to you today by the letters A and S, and the number 7...").

The show was—and still is—also revolutionary in having an elite squad of educators and child psychologists pore over every single aspect of every segment in the whole show. Sesame Street has been called a living laboratory, and the show has been constantly tweaked to introduce new curriculum and improve its educational value. The show was completely Retooled in 2002 to respond to new child development research. As per The Other Wiki:

Sesame Street underwent an obvious, dramatic makeover... The new format emphasized rituals and repetition, featured brighter, more cartoon-colorful real-life characters and sets, and more exaggerated, simplistic mannerisms in addressing the screen and seeking viewer interaction. Regular segments...are almost identical from one episode to the next, with only minor story details changing between shows.

The set has expanded and contracted over the years but in classic form is a typical New York cul-de-sac, with a brownstone apartment block, a convenience store, a boarded-off vacant lot, and a big open area at one end used as a playground. This urban setting, multiracial human cast (plus guest stars, including Jesse Jackson and Bill Cosby) and multicolored Muppets added to the hip, inclusive feel.

Although aimed at preschool children, Sesame Street deliberately includes enough mainstream pop culture references to entertain older children and parents as well, the better to encourage family involvement in the learning process. A cameo appearance on the Street quickly became celebrity chic, showcasing such diverse stars as Stevie Wonder, R.E.M., Madeline Kahn, the Star Wars droids, Paul Simon, Mel Gibson and Patrick Stewart. All of this has had the side benefit of the show developing a very strong adult fanbase over the decades, as the original audiences have grown up and introduced the show to their children.

On November 11, 2019, Sesame Street celebrated its 50th anniversary, making it the longest-running and most successful children's show in American TV history. For the sake of education, we hope it stays around for at least 50 more.

When Will Lee — who played crotchety storekeeper with a heart of gold Mr. Hooper — died mid-season in 1982, the show tackled the character's death head-on, with honesty, dignity and respect, in what is still considered a groundbreaking moment in children's programming. His store's ownership has changed hands a number of times—Mr. Hooper left the store to his assistant David, who sold it to black retired firefighter Mr. Handford following his own departure, who handed over ownership to Japanese-American Alan in 1998—but the store retains Mr. Hooper's name to this day.

Various specialized Muppets, created and performed by Jim Henson and his crew, star alongside the humans. The Sesame Muppet characters were initially intended as parts of the "commercial" shorts that would only air on occasion, but they became such a hit that the show was tweaked very early in the season to incorporate them into the core structure. They were developed separately from the rest of the Henson stable and are now the property of Sesame Workshop; with the exception of Kermit the Frog, they only very rarely cross over into the Muppet Show universe. note The Sesame Muppets were originally owned by the Henson Company and licensed to CTW/Sesame Workshop, with Henson and CTW splitting merchandise revenue equally. Sesame Workshop bought the characters in 2001. Disney's acquisition of the Muppet Show characters in 2004 means even Kermit can't be used in new Sesame Street footage without permission; since then he has made only two appearances outside of the archives, in a 2009 episode to celebrate the 40th anniversary of the show, and again in the show's 50th anniversary special in 2019.

Beginning in 2016, due to PBS having trouble paying the show's licensing fee,

the show aired first on HBO, whose deep pockets have even allowed increasing the episode count to 35 per season, before airing on PBS Kids a few months later. The show also switched to a half-hour format. In July 2020, the series completed its run on HBO; beginning with season 51, the show premieres on the streaming service HBO Max, though it maintains its current relationship with PBS Kids.

Another noteworthy fact is that Sesame Street is or has been broadcast in more than 100 countries across the world. Many of these countries even have their own localized adaptations; these adaptations usually create entirely new scenes with their own human and Muppet characters, along with dubbed scenes from the American version. Notable adaptations are the Latin American, German and Dutch versions, which have all run from 1972, 1973 and 1976 to this day respectively. The German, Dutch, Latin American and South African versions, Sesamstraße, Sesamstraat, Plaza Sésamo and Takalani Sesame respectively, have their own pages, and a list of other international versions can be found here.

A list of works based off of Sesame Street can be found on the franchise index.

Sesame Street is brought to you by the tropes:

Sesame Street was brought to you by the letter "T", and the number "6".
Sesame Street is a production of the Children's Television Workshop.
Feedback

You know how they always say your birthday wish only comes true if you blow out the candles on the cake in one breath? Well, that was the case for Big Bird on his birthday. He wished for nothing more than that exact prerequisite itself.

You know how they always say your birthday wish only comes true if you blow out the candles on the cake in one breath? Well, that was the case for Big Bird on his birthday. He wished for nothing more than that exact prerequisite itself.