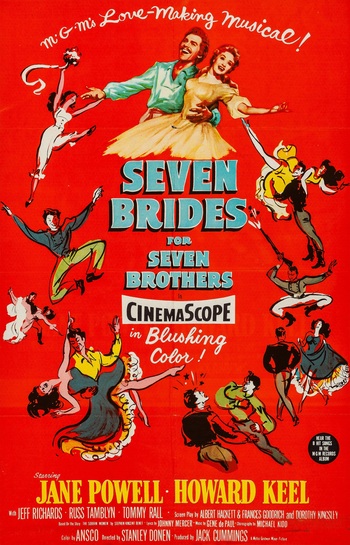 Seven Brides for Seven Brothers is a 1954 Western Musical film, directed by Stanley Donen and starring Jane Powell, Howard Keel, Julie Newmar, and Jeff Richards. It was based on a short story

by Stephen Vincent Benet, itself a parodic takeoff on the Rape of the Sabine Women from Classical Mythology.

Set on the nineteenth-century American frontier, the movie focuses on Adam Pontipee and his new bride Milly. Adam has six rowdy brothers who seeing Adam's success all decide to also look for a wife. Milly tries to train them into being gentlemen, but when they attend a disastrous barn raising where the townsmen provoke them into fights, Adam encourages them to follow the example of the Romans and the "Sobbin'" women and kidnap the women they are sweet on instead of properly courting. An avalanche traps the women with the men over the winter, and they warm up to each other.

Saul Chaplin and Gene de Paul composed the songs, with lyrics by Johnny Mercer and choreography by Michael Kidd. Two Screen-to-Stage Adaptation were produced. One on the Dallas Summer Musicals in 1978 with Keel and Powell reprising their roles, and a second one on Broadway in 1982 which ran and toured until 2015. There was also a TV adaptation that lasted for one season (1982–83) on CBS. The 1968–70 series Here Come the Brides was also partly inspired by this film.

Tropes used by this musical:

Example of:
Abduction Is Love