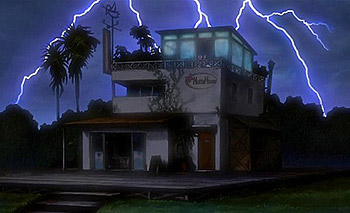 Nothing says "This is dramatic, ominous and/or heavy foreshadowing!" like an ionic ground-to-air charge-release — in other words, lightning, and the accompanying thunder. Whether underlining the villain's apparent success, or the heroes' last-second arrival, you can just bet that the thunder is anything but a random result of the global weather-system.

There are variants of this:

In the past, the stock sound effect for this was "Castle Thunder", which now is only used for a retro feel. Interestingly, almost all Hollywood thunder occurs simultaneously with the lightning flash (obviously averted when said lightning is blowing up trees and power lines right in the middle of the scene). See also Lightning Reveal.

This will not overlap with Gray Rain of Depression unless the person is angry as well as sad. An example of Empathic Environment. See also Thunder Shock, Fear of Thunder. Also see It Was a Dark and Stormy Night. Compare Lightning Can Do Anything, related to Stop Motion Lighting.

After successfully drugging the Abbeydwellers and kidnapping their children, Slagar laughs victoriously.

After successfully drugging the Abbeydwellers and kidnapping their children, Slagar laughs victoriously.