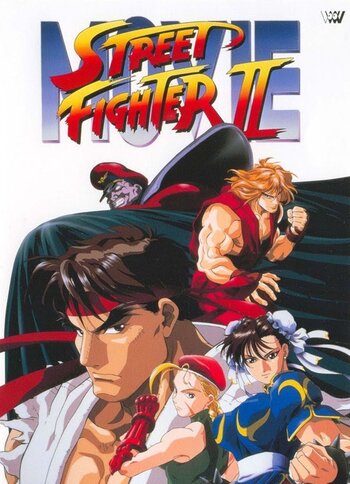 This is no video game!
"The ultimate battle computer game "Street Fighter II" is now a full-length animation motion picture! Your favorite Street Fighters stand up against the evil Vega who plots to conquer the world. In an all-ensuing battle, the rivals Ryu and Ken join forces to confront Vega with the never-before-seen technique "the double fireball". A must-see super battle action movie for All Street Fighter fans."
— Official description from the Japanese LaserDisc.
Advertisement:

After the unexpected success of the original Street Fighter II and its subsequent revisions and console ports, Capcom decided to produce a feature-length anime movie based on the series. The movie, simply titled Street Fighter II Movie in Japan and later released internationally as Street Fighter II: The Animated Movie, was first announced in 1993 at the same time as Super Street Fighter II: The New Challengers (the fourth version of the game) began distribution in the arcades. It was released theatrically on August 8, 1994.

Shadowlaw's innumerable criminal activities capture the attention of Interpol, which sends lead investigator Chun-Li to team up with U.S. Air Force Captain Guile. Guile is initially reluctant of the partnership until he discovers that Bison had killed someone close to them.note Chun-Li's father and his Air Force partner. This revelation gives them common ground to work together. The duo soon learn about Shadowlaw's Monitor Cyborgs and eventually land on the trail of Ryu.

Ken Masters, Ryu's friend/former training partner/rival, spends the off-time between fighting tournaments with his girlfriend Eliza, but finds himself unsatisfied. He awaits the day when he and Ryu can settle their "unfinished business" with another fight. Ryu himself travels throughout Asia in search of fights as well, focused on honing and perfecting his skills with each successive challenge. Once Bison discovers Ken and Ryu's shared history, things go from bad to worse. Ryu is blissfully unaware that he represents the key to either Shadowlaw's destruction or complete dominance...

Unlike the live-action movie based on the franchise, Street Fighter II: The Animated Movie stays as faithful as possible to the original game and its various iterations at the time. Several fight scenes and new ideas introduced in this filmnote like the fight between Ryu and Sagat at the beginning of the film, Ken's longer hair during his training days with Ryu, how Ryu got his red headband, and a two-on-one battle with Ryu and Ken fighting Bison eventually became part of the Street Fighter Alpha series. Soon after the release of this film, Capcom made a video game that follows the events of an upgraded Monitor Cyborg recording various Street Fighter battles. A manga adaptation was also released.

The film's initial American release in 1995 came with a healthy dose of censorship attached — cuts to the infamous Chun-Li shower scene accompanied toned-down blood and swearing. Manga Entertainment rectified this in 2006 with a dual-sided DVD that contained a (virtually) uncensored version of the English dub and a (completely) uncensored version of the original Japanese version of the film. In 2008, Netflix began streaming a fully uncut version of the film's English dub with either the English or Japanese soundtrack backing the dub. It is currently licensed by Discotek Media, who re-released the film on DVD and Blu-ray