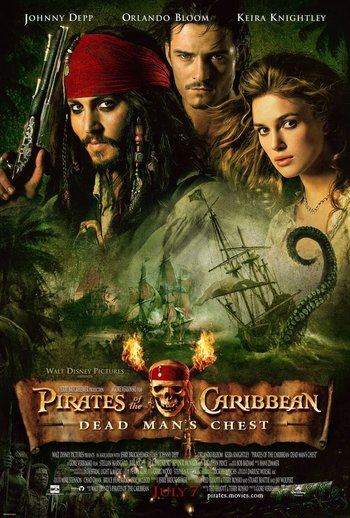 Captain Jack is back.
"Do you fear death?"
— Davy Jones
Advertisement:

Dead Man's Chest (2006) is the second movie in the Pirates of the Caribbean franchise.

The movie begins with the arrival of Lord Cutler Beckett, the head of the East India Trading Company, who blackmails Will Turner into hunting Captain Jack Sparrow and his magic compass to spare Elizabeth Swann's life for treason (since they helped Jack escape). Beckett's ultimate target is the chest containing the heart of Davy Jones, captain of the Flying Dutchman and immortal lord of the oceans, who controls the dreaded monstrous Kraken. Holding the heart will allow Beckett to control Davy Jones, and hence all the seas of the world.

Jack has history with Davy Jones himself—thirteen years ago he made a deal to raise the sunken Black Pearl in exchange for his service aboard the Flying Dutchman after a period of time. Now his debt is coming due, and Jack is desperately searching for the heart of Davy Jones to use as leverage to renegotiate the terms of his deal.

The monstrous pet of Davey Jones attacks the ship Will Turner is on.

Example of:
Kraken and Leviathan

The monstrous pet of Davey Jones attacks the ship Will Turner is on.