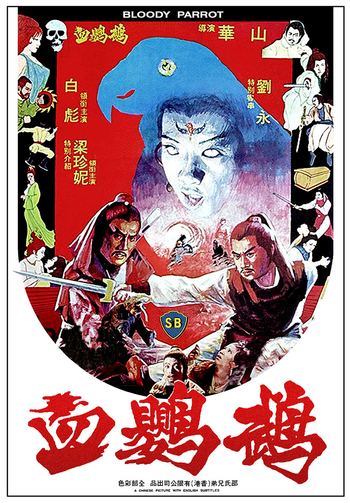 An urban legend of a deadly omen of death, called the "Bloody Parrot", emerged shortly after an Imperial Escort transporting a cargo of treasure is brutally murdered and the treasure stolen, days after the death of a reputable martial arts master, Master Guo Fan. With the escort's leader, the mercenary swordsman Yi Ting Feng, being a prime suspect, Ting Feng must uncover the mystery of the Bloody Parrot to clear all evidence of his involvement with the theft in an unnecessarily convoluted, Mind Screw-inducing, conspiracy laden wuxia flick loaded with twists, turns, and a generous dose of random twists and turns mashed into eighty minutes of Shaw entertainment.