A Truce While We Gawk 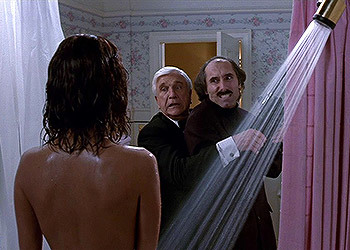 There'd be a caption, but we're a bit distracted ourselves.
Everyone stopped to blink at that for a second. I mean, come on. Impaled by a guided frozen turkey missile. Even by the standards of the quasi-immortal creatures of the night, that ain't something you see twice. "For my next trick," I panted into the startled silence, "anvils."
— Harry Dresden, The Dresden Files: Blood Rites
Advertisement:

There's a climactic battle going on all around. Suddenly, something happens and both sides turn and stand around watching in horror or surprise. They may even exchange glances, shrug, or give up fighting altogether.

The results of this trope are usually Delayed Reaction, a resumption of hostilities, or total embarrassment.

Supertrope of Battle-Halting Duel. See also Mid-Battle Tea Break, Playing Nice for Now, Chaos While They're Not Looking and Enemy Mine. Can result in a Pass the Popcorn moment.

Note: This trope tends not to cover arguments but does cover fights of all other kinds.

To distract him from noticing Aladdin attempting to retrieve the Genie's lamp, Jasmine seduces Jafar to the point of kissing him. This disgusts both parties.

Alternative Title(s): A Truce While We Gawp

To distract him from noticing Aladdin attempting to retrieve the Genie's lamp, Jasmine seduces Jafar to the point of kissing him. This disgusts both parties.