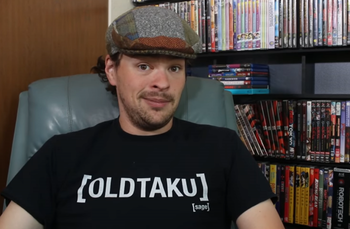 Bennett White, a.k.a. Bennett the Sage, is an Internet video producer formerly on Channel Awesome, whose matter-of-fact style contrasted with the more theatrical reviewers on the site. He can now be found here

and on his own site

On occasions, Bennett also made regular cameos in other TGWTG personalities' videos, where he portrayed himself with a sadistic persona, thanks to an early crossover with Ask That Guy with the Glasses. From 2009 until 2012, he did an annual anime review crossover with the Spoony One (which led to the creation of Anime Abandon), and he also made frequent appearances on The JesuOtaku Anime Review, where he subjected them to truly horrendous softcore garbage.

'Til next time!
Feedback

An anime frustrates Sage to the point that he pulls a Wrath of Khan.

An anime frustrates Sage to the point that he pulls a Wrath of Khan.