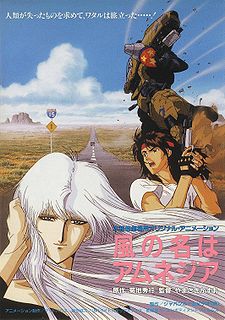 What was left for Humankind after it lost all of its memories?
Advertisement:

A science fiction novel by Hideyuki Kikuchi, A Wind Named Amnesia is a story set After the End...sort of. Three years after losing its memories, humanity has been reduced to an almost savage level, with only the most basic of instincts now driving the lost and confused humans. Wataru, a young man, travels across America, searching for answers to what happened, and why. Along the way, he meets a girl named Sophia, who tags along with him. As they travel across the country, they witness how society has changed after being stripped of all reason and logic. And it soon becomes apparent that Sophia may hold a secret pertaining to the fall of humanity...

Written in 1983 and later adapted into a film in 1990 of the same name, it was one of Kikuchi's many lesser known works (when compared to the more widely known Vampire Hunter D and Wicked City).