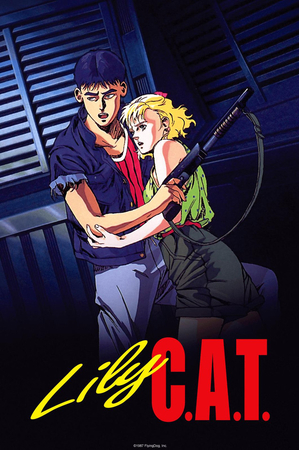 Lily C.A.T. is is a science fiction/horror anime film distributed by Studio Pierrot in Japan and Streamline Pictures in North America. Released in 1987, the film follows the spaceship Saldes on a 40-year mission. Under the instructions of an unknown force, the ship's A.I. computer system accidentally introduces an alien bacterium into the ship while its human crew is in cryostasis. Naturally, both the ship and the unknown force want to eradicate the bacterium from the ship but also to cover up for this blunder. And quite unfortunately, the crew of Saldes find themselves battling against the bacteria, the ship, and even amongst themselves for survival.

Lily C.A.T. drew heavily from eighties sci-fi film elements, most obviously from Alien and The Thing (1982). The crew's struggles against the A.I. is also reminiscent of 2001: A Space Odyssey. Character designs and even monster designs were provided by none other than Yoshitaka Amano.