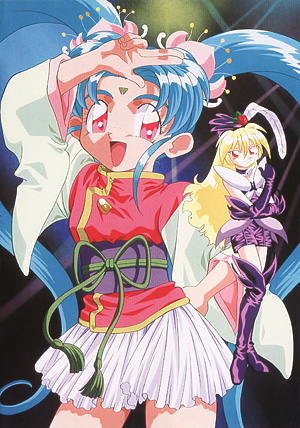 The basic plot of both the OVA and the TV series is the same: in the magical land of Juraihelm, a ditzy but kind mage called Tsunami is chosen to be the next queen. Ramia, her main rival to the throne, is furious about this and plots to sabotage Tsunami's claim.

As part of the succession rites, Tsunami must choose a "kindred spirit" on Earth to bestow magical powers upon so that her protégé can help restore the Balance of Good and Evil that has become misaligned in the former queen's absence. Tsunami chooses a precocious girl named Sasami Kawai, who is less-than-thrilled with the dated costume and extra baggage that comes with being a designated crusader of justice. However, unknown to Tsunami, Rumia has also chosen a "kindred spirit" to create a Dark Magical Girl rival that will derail Sasami's efforts: Misao Amano, Sasami's shy and lonely best friend who is hypnotized into the raging Id known as Pixy Misa.

The OVA and TV series diverge in a few aspects, most notably how certain Tenchi Muyo! alumni are re-cast. The TV series is also much more dedicated to being an Affectionate Parody of the Magical Girl genre with its own unique cast of characters instead of a simple Alternate Universe short.

The TV series had a strange official release in English: unlike every other iteration of the Tenchi Muyo! franchise, the show was released in a subtitles-only format without an English dub. It was also advertised as being intended for very young children (ages 3 and up) and had mild censorship to fit this demographic, despite the fact that their target audience was too young to read. This release is currently out of print.

A three-volume Pretty Sammy manga series was also released in Japan, but no English version was ever produced. The series is a little odd, in that the first half of the first volume is based on Magical Girl Pretty Sammy, while the remaining two-and-a-half volumes are based on Magical Project S. A two-part short story based on the OVA continuity also appeared in an issue of the Tenchi Muyo! manga.

On September 21, 2017, a Kickstarter was started by AIC to create a five-minute promo for a possible sequel to Magical Project S called "Pretty Sammy 14", which continues the adventures of Pretty Sammy and Pixy Misa as teenagers.

These shows provide examples of:

Mihoshi gets kicked in the stomach, and...

Mihoshi gets kicked in the stomach, and...