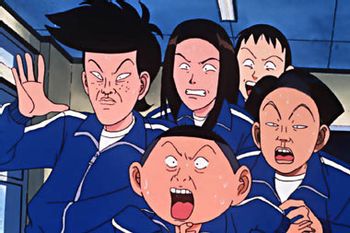 That's the short version. This manga by Minoru Furuya is about the 8th grade class, section 5, and their awful antics and growth towards attempting to be the best ping pong club.

They weren't willing at first - the girls' team was far better and their room was threatening to be taken over, until the principal convinced the resident cool delinquent girl, Kyoko, to whip the boys into shape. She manages to do so by offering a "sex ticket" -"whoever wins may do whatever they want with my body for a month!" to the boy that wins the most and becomes the best. Complications occur when she realizes that Takeda and her have feelings for each other, and they are torn apart at every given opportunity

Can Kyoko turns these losers to winners? Will Tanabe ever get rid of that obnoxious stench? Will you ever see sea turtles in the same way after watching this series? Just how far will this show go?! These answers (and many more you did not want to know) lie ahead. Not for the faint of heart.

See Cromartie High School for a similar series. Not to be confused with the series Ping Pong. At all.

Tropes related to this series: