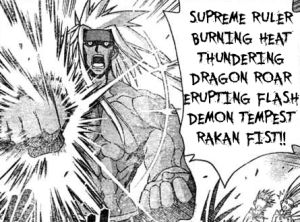 "No good! The name's too long, and it doesn't sound good at all!"
Advertisement:

If you can do something more impressive than just throw a punch, your attack(s) must have an equally impressive name. More than that, you have to call it out as you launch the attack. It doesn't matter if it's a martial arts move, a magical spell or your secret superweapon; if you can't say its name, it just isn't nearly as cool or effective. Also, expect plenty of echoing to come with it, and (if a fighter is feeling particularly bombastic) dramatic... *pauses* ...WITHAYELLATTHEEND! A standard feature of practically every Magical Girl, high fantasy, or martial arts anime.

The origins of this phenomenon are at least Older Than Print, and probably much older. The idea that words can grant power is a cross-cultural phenomenon that shows up frequently in the earliest tales of swords and sorcery. Members of the Sinitic ethnolinguistic family, in particular, tend to ascribe special importance to the power of written characters, and the belief that special words can invoke control over supernatural power permeates their folklore (just ask your local Shinto, Buddhist, or Taoist practitioner if they've donated to a shrine or temple to have a Paper Talisman written lately). The magic power of spoken and written words was also a key concept in Ancient Egyptian religion and Ritual Magic.

In terms of realism, this has some ground as traditional and even some current practitioners of martial arts hold the belief that accompanying statements and/or vocal noises alongside execution build up their chi, thereby increasing the power and efficacy of their moves and techniques. Put less spiritually, saying a phrase at the right time during an attack ensures proper breathing. A call used for this reason is known as a kiai. The naming of attacks also served a more practical purpose as many martial arts schools, Chinese ones, in particular, used to be secret societies. The passing down of techniques was done orally and giving them esoteric names often facilitated this transmission. In addition, kiai has the potential to startle the opponent and give you an opening.

This is also often combined with a spellcaster's Invocation, with the final part of the incantation being the name of the spell, cried out just as the spell is triggered (Spirit of Fire, gather into my hand and incinerate my enemies! FIREBALL!). A character who grows in power will eventually graduate to being able to do the initial incantation mentally, turning the final trigger into this trope completely.

A variant has a Combat Commentator recognizing the attacks being used (usually with a line like "That's the legendary such-and-such-and-something-or-other technique!") and explaining them to any other characters watching (and the audience, of course). When the person launching the attack spends time doing the commentary, however, they may be guilty of Talking Is a Free Action. And, are hopefully in a comic, manga, melodramatic or animated show rather than doing this in Real Life.

Another variant, primarily found in video games, displays the attack name on-screen as it is being executed, without a vocal "call". This typically happens in games where there is no voice acting; the call is implied. In fact, flamboyant attack/technique names are pretty much a trope in and of themselves.

However, used properly and skillfully it can be an effective and compact narrative device. There isn't really a simpler way to let the audience know that Captain Kirk's next phaser blast isn't supposed to kill the alien, or that Judge Dredd's next bullet is supposed to go "boom". Especially in manga, it's particularly difficult to let the reader know what special attacks are used without either motion or color, so having the characters say it is probably the most practical solution.

For a long time, only flashy Finishing Moves or powerful Limit Breaks were considered worthy of calls. Two well-known examples are Kenshiro spelling out the spectacular death he just dealt to his foe and Son Goku's signature "KA... ME... HA... ME... HAAAAAA!!" A few pro wrestlers did this as well. ("Power bomb!") It wasn't until the advent of Fighting Games, particularly Street Fighter II, that shouting out every little spinkick and ki ball became standard practice.

Super trope of Invocation. Sister Trope of Magical Incantation. May overlap with Explaining Your Power to the Enemy, Big Word Shout, Screaming Warrior, Roaring Predator and Pre-emptive Declaration. Overlaps with Make Me Wanna Shout if yelling out the name of the attack is the attack. In a group, it sometimes overlaps with Attack Pattern Alpha. A similar trope, but with bathroom breaks, is Calling Your Bathroom Breaks.

For a very villainous variation, see To the Pain. For battle cries or shouts, see Kiai and Battle Cry. When violently subverted, it's Talk to the Fist. (Mostly) has nothing to do with Calling Your Orgasms. When your opponent is calling your attacks, it's Combat Clairvoyance or Kung-Fu Clairvoyance.