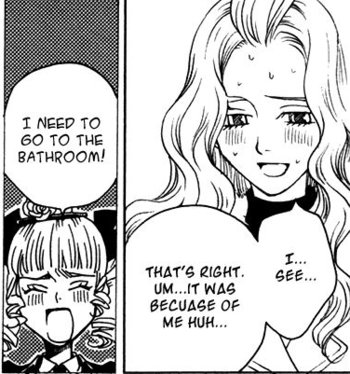 In your brain, no one can hear you scream.
"I need to urinate."
— Beverly Hofstadter, The Big Bang Theory
Advertisement:

Everybody does it, but due to courtesy most people exercise discretion, merely saying something like, "Please excuse me for a moment." Not this character. When they have to go, they announce it loud and clear for everyone to hear: "I have to pee!"

Obviously, if a young child does this they might just not know any better; this kind of behavior is often associated with children during (or just over) toilet training who may need help with the process and are generally praised for doing so. Likewise, a student may need to state for the record why he or she is leaving the classroom in order to satisfy attendance laws. If a grown character still acts this way, it can indicate childishness.

In a non-childish character, it can still be used to indicate a lack of social skills. Like some other forms of impropriety, this can also be used to show that characters are comfortable dispensing with formalities between themselves. It could even show a twisted form of respect for someone else's time as a way to imply how long the break will likely be, as brown takes longer than yellow. Or it could just be they've been holding it in so long that they don't have the mental energy to spare on being polite.

May or may not involve an Excrement Statement. Sometimes a character who engages in this is faking in order to attempt a Bathroom Break-Out or Bathroom Search Excuse, or just to get away from an awkward conversation (see I Need to Go Iron My Dog). Contrast Go to the Euphemism, for when a character is less blunt. Calling Your Attacks is a similar trope, but with attacks.

Lastly, this can be played for a very mild form of Toilet Humor, sometimes as a Bottom of the Barrel Joke.