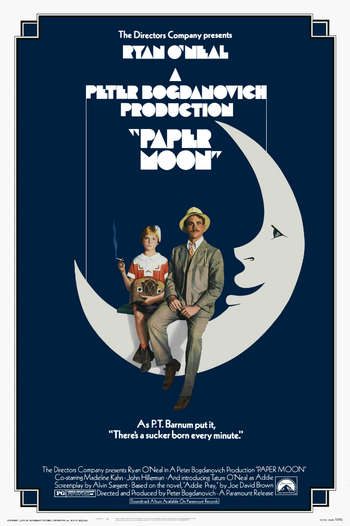 Moze: You don't have to worry. I ain't about to leave some poor little child stranded in the middle of nowhere. I got scruples too, y'know... You know what that is, scruples?
Addie: No, I don't know what it is, but if you got 'em I sure bet they belong to somebody else!
Advertisement:

Paper Moon is a 1973 period comedy-drama film based on the novel Addie Pray by Joe David Brown, directed by Peter Bogdanovich and starring the father and daughter team of Ryan and Tatum O'Neal.

Set in Kansas during The Great Depression, the movie follows Moses "Moze" Pray, a Con Man specializing in Scamming the Bereaved, who is reluctantly tasked with delivering the recently-orphaned, nine-year-old Addie Loggins to her aunt in St. Joseph, Missouri. Despite vehemently denying that Addie is his daughter (which she likely is, considering Moze knew her "wild" mother well), he takes a liking to a her — even more so when he realizes his grifting looks more legitimate with a child by his side.

The film was nominated for Academy Awards in four categories: Best Screenplay Adaptation, Best Sound, and two nominations for Best Supporting Actress — Madeline Kahn and Tatum O'Neal herself. Tatum won, making her the youngest actor to win a competitive Oscar (she was 10); this record still holds as of 2021.

This work provides the following tropes: