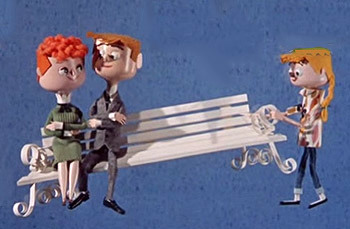 "Straighten up their mess with togetherness!"
"Your single parent is really just waiting for you to set him or her up!"
— Cracked.com, 6 Horrible Lessons Hollywood Loves to Teach Kids

The children decide they want a new mother/father and they have the perfect person in mind. Now if only they can get their parent to listen to them.

Usually, the kids come up with a crazy plan to set up their parent(s) and Hilarity Ensues. Strictly speaking, this trope can apply to finding a partner for a Cool Teacher, mentor or grandparent; any adult who plays a parental role can participate in this plot. Some such examples may involve a Teacher/Parent Romance or Marrying the Nanny. If the people being set up are similar age or social status to the protagonist, that's Shipper on Deck, the supertrope to this.

Usually a subtrope of Parent with New Paramour, unless the First Father Wins. Contrast Remarrying for Your Kids. Compare Students Playing Matchmaker.