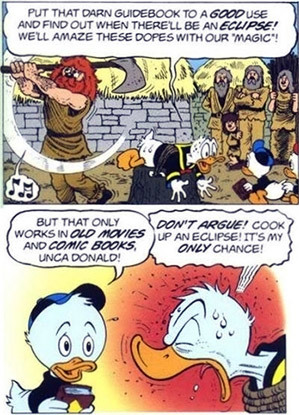 Good thing you are in a comic book. Just saying...
BoJack: Look, I played a dad for nine years on TV, so I think I know a little bit more about parenting than you two jokers. The kids on Horsin' Around didn't need boundaries. All they needed was some good old-fashioned love.
Todd: BoJack, this is not a TV show, okay? This is real life!
Lemur: (enters the room on fire) AAAAAH! LEMUR ON FIRE! LEMUR ON FIRE! (crashes through the wall, making an Impact Silhouette)

One character tells another; this is reality, this is not a movie, or any variation thereof, most often the stock phrase "This isn't a/an X, you know"; in order to get them to divorce themselves from an unrealistic notion — only, little do they know, their whole world indeed isn't reality! This phrase is often used when defying a trope. In other words, this trope is a Lampshade Hanging affirmation of the Fourth Wall, with a subtle joke and a bit of dramatic irony rolled in.

It is a message to the viewers that "Hey, this show/movie is more grounded in reality than average." This message is not always true. Sometimes it's done for reconstruction purposes where a trope is played realistically but still works in real life.

It's somewhat common in sci-fi and comedy which feature wildly varying levels of realism and can be used to help the audience get a feel for what the limits are. Beyond the Impossible is when these limits are established and then deliberately broken. Sometimes, this trope is also used in romance stories when a cynical Love Interest feels that Grand Romantic Gestures and certain Wish Fulfillment tropes of the genre are unrealistic portrayals of love and that real life love does not work that way.

Contrast Not a Game, which (usually) does not invoke the Fourth Wall. May be subverted by an Aside Glance. Another possible twist is to have the characters object to an "unrealistic" idea that is in fact perfectly realistic and sensible within the story.

When inverted, this is Leaning on the Fourth Wall.

Closely related to Wrong Genre Savvy, although the consequences of the latter tend to be much more dire. See also Where Do You Think You Are?, Arbitrary Skepticism, You Watch Too Much X, Real World Episode, Direct Line to the Author Literary Agent Hypothesis, Daydream Believer, Trapped in TV Land. Contrast with Medium Awareness and Reality Is Unrealistic. Reality Ensues is the exact opposite of this trope, though it might be a Justified case for the former. The stock phrase itself can be major Narm for some people.

"This is real life!"

"This is real life!"