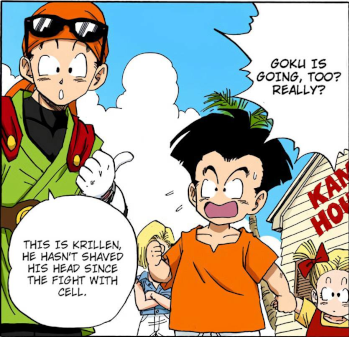 Tails: [...] He said his name is Yacker. He's from a race of beings called "Wisps".
Sonic: Lisps?
Tails: No, Wisps, with a "W".
Sonic: (facing the screen) I'll just stick with aliens if that's OK with everybody.
— Sonic Colors
Advertisement:

When a character looks at the audience and comments on what is going on in the work they are in, but does not explicitly acknowledge there is an audience.

One of the mildest forms of Breaking the Fourth Wall; often seen in works where the Wall is otherwise quite solid and it would seem odd for the characters to really acknowledge it. It's even possible for an Aside Comment to leave the Fourth Wall entirely intact if characters are interpreted as talking to themselves (see Thinking Out Loud) or to an imaginary audience. This type is sometimes done in a quiet voice (called sotto voce) to indicate that other characters cannot overhear what is said. Usually, the interpretation is left open unless there are other kinds of Breaking the Fourth Wall going on; it would be odd, to say the least, to comment on the matter if the Fourth Wall is solid, after all.

Sometimes used as a form of exposition where the character thinks out loud about what they're doing so that the audience will know, too; this can be done without even looking at the Fourth Wall, however. At other times, just used to deliver a punchline and/or snarky comment.

In a non-visual medium, where the characters obviously can't look at the audience, seeming to address the audience without making it explicit may suffice for this. However, the speaker visibly not looking at the audience disqualifies a piece of dialogue from being an instance of the trope.

Closely related to the Aside Glance, just taking it a step further. Compare and contrast with Fourth Wall Psych, where the idea of Breaking the Fourth Wall by addressing the audience is presented and then disproved. See also Leaning on the Fourth Wall.