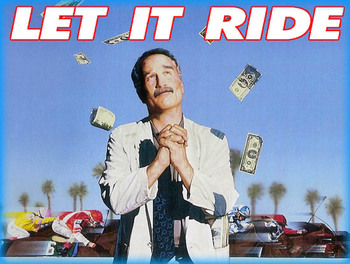 Jay Trotter: The man just said that the only way the horse could lose was if lightning strikes! What do you like? You like the odds on lightning?
Advertisement:

Let It Ride is a 1989 comedy directed by Joe Pytka (Space Jam) and starring Richard Dreyfuss, David Johanson, Teri Garr, Jennifer Tilly, Allen Garfield, Michelle Phillips, and Robbie Coltrane, based on the novel Good Vibes by Jay Cronley (who also wrote Quick Change, with which this film shares many of its quirks).

Jay Trotter (Dreyfuss) is a Miami cab driver who has just been looking for one good day. He sees his chance when Looney (Johanson), a fellow cab driver, records a horse owner tell his friend to bet on Charity in the first race, because it's a sure thing. Trotter sees this as a sign, and despite telling his wife Pam (Garr) he's going to quit gambling, decides to bet $50 he has saved on Charity (who's a longshot). Charity ends up winning, and though Trotter considers going home at various points, he thinks this may just be the day he's due.