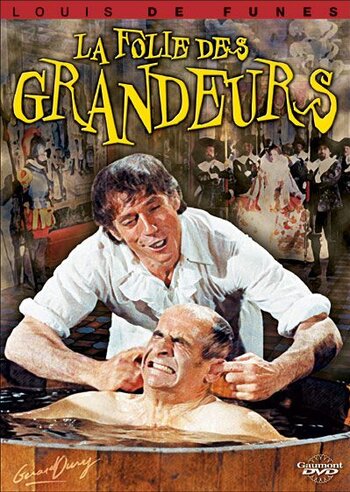 Ruy Blas hasn't been funnier since that movie.
"What will become of me? I'm a statesman, I can't do anything!"
— Don Salluste
Advertisement:

In 17th century Spain, Don Salluste (Louis de Funès) is a wealthy and powerful noble who is also the Minister of Police and Finances: a greedy, stingy, hypocrite and overall odious Evil Tax Collector, he preys on the poor and embezzles money for himself. When he is disgraced by the Queen for allegedly fathering a child with one of her servants, he plots his revenge by using his handsome nephew César and then his own valet Blaze (Yves Montand) to trick the Spanish King Charles II into thinking that his wife is cheating with him. However, luck isn't on Salluste's side...

Delusions of Grandeur provides examples of: