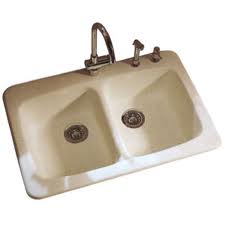 And now, this wiki is complete.note Your browser may have it pre-included as well

Costello: You know... you know, they have hit me with everything but the kitchen sink.
Abbott: Oh, well... we can fix that. [pulls the sink out of the wall, breaks it over Costello's head]
— Abbott and Costello, Lost in Alaska
Advertisement:

Every time someone refers to the expression "everything but the kitchen sink" in any way, shape or fashion, an actual, literal kitchen sink will inevitably appear. Sometimes, the saying is not even mentioned; showing a kitchen sink in a context where the saying could be used works as a Visual Pun by itself. This trope is almost always Played for Laughs, especially in cartoons.

The original expression is an idiom of unknown origin but originating in the early 20th century, meaning "everything that wasn't bolted down". Kitchen sinks are not only bolted down, but connected to the plumbing.

Nothing to do with a Fantasy Kitchen Sink or a Sci-Fi Kitchen Sink, unless you somehow manage to incorporate them into the mythology as well. Also unrelated to the underground comix publisher Kitchen Sink Press (who probably rather wants to allude to "filth" than to this trope).

M.E.R.F. fires everything, even the kitchen sink.

M.E.R.F. fires everything, even the kitchen sink.