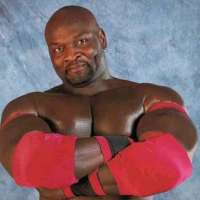 "YOU'RE GOING DOWN!"
Advertisement:

Anthony Norris (born June 6, 1963) is a retired American Professional Wrestler best known for his time in WWE from 1995-1998. He debuted in 1989 and worked various Texas promotions under a variety of names. He arrived in WWE in 1995 and became the first African-American WWE Intercontinental Heavyweight Champion

by defeating Goldust at King of the Ring 1996. His career began to fall apart when the debuting Faarooq attacked him, giving him a kidney injury. WWE released him in February 1998. He had a very weak run in WCW in 2000 as "Big T" before disappearing again. He also held the USWA Unified World Heavyweight Title